I love this project as much as I love the story behind it.

My sister has recently moved back to the suburbs after living in Toronto for two years, not a decision made lightly. She loved her neighbourhood, from the convenient location to transit, to the quirky little shops located a few blocks away, her favourite coffee shop, and her favourite bar.

For Christmas, I knew I wanted to make her a shawl. I bought a stunning skein of Manos del Uruguay Alegría; I grappled back and forth with the choice to be selfish and keep this beautiful yarn all to myself, or do I use it and make something just as stunning for someone else. Gifting won out, and I’m so glad it did. 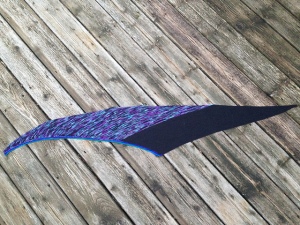 Being honest, it wasn’t the pattern that sucked me in but rather the name. 504 King West is the name of a streetcar route in Toronto, one that I have taken a handful of times with my sister, a streetcar route that ends around the corner from her place in TO.  This pattern was designed by the Knit Cafe, a LYS in Toronto that I’ve visited with KT. It’s the same LYS she texted me about after exploring her neighbourhood and finding it. As a non-knitter, KT has as little interest in yarn shops as all non-knitters do, but she found this shop, texted me about it, and we visited it on one of my weekend visits.

With this connection to her neighbourhood and its name rooted in Torontonia, I knew immediately this was the shawl for my sister. (Yes, I just made up that word, Torontonia, but if Canadiana and Americana exist as words meaning concerning or characteristic of the country, its civilization, or its culture, then Torontonia can totally be used in the same manner!)

I started 504 King West and worked a few rows while on my cruise. One beautiful thing about this shawl is that it is made with several complementary colours, and I made this one the same way. The variegated Manos is colourful and bright, and it pops against the black Cascade Heritage I bought for contrast. For edging, I was able to use what I have in my sock yarn stash, and I used a self striping yarn; I love that this is the same self stripping yarn that I bought months before at the Knit Cafe.

Thank you Knit Cafe for publishing such a great pattern with a fantastic Toronto-centric name. It’s a wonderful pattern if you’re looking for a shawl, easily memorized, and very transportable.  Please visit their blog post to check out the pattern and to read the story behind the inspiration for 504 King West.