Went downtown in the cold,
6:30 on a Friday Night,
Just to check out the late night,
Music show…

I don’t think I’ve discussed my deep love of the Barenaked Ladies yet on this blog.  So this post is fairly overdue! There are a few bands that I have loved for decades or more, their music is familiar and comforting.  Along with the Beatles, the Who, and Meat Loaf, the Barenaked Ladies are one of these bands.  Yes, I have a very eclectic taste in music.

I was fairly young when Gordon was released, and the pop-y, silly songs on that album appealed to me (Grade 9, Enid, and, of course, If I Had $1,000,000).  The band and the album were vetted by my older, cooler cousin, so obviously, it was a good choice.  I remember buying Maybe You Should Drive on cassette tape.  It was a big deal.  I fell out of the BNL for a time, but I fell headfirst back in when they released Disc One: All Their Greatest Hits.  And I fell hard.  My first concert was with my sister at Massey Hall in 2005; I’ve been to a handful of shows since, and every concert guarantees to be a fun time.

I like giving my sister concert tickets for her birthday.  It’s hard to buy for someone who has a birthday so close to Christmas, but it gives us a fun night out, fun sister-bonding time.  Her past birthday was no exception, and two Fridays ago, we were at Roy Thomson Hall in Toronto for their Holiday concert.  What made this concert so unique was that it was with the Toronto Symphony Orchestra.  The crowd was slightly more subdued than usual, but the music was outstanding!  A number of their timeless hits were performed with the Toronto Symphony Orchestra.  This brought about a fullness to the songs, and it was such a great complement to the quartet.

Katie and I were also on a mission – we wanted to meet some Ladies.  So after the show, we waited with some other devoted fans, and after an hour or so, the band members took time as they were leaving to meet and greet with the fans.  K and I just wanted to say how much we enjoyed both the concert and their music, and we got photographs with the three members we met!  They were genuine, nice, and so great about taking a few pictures with fans.  It truly made our night, such a simple gesture from them. 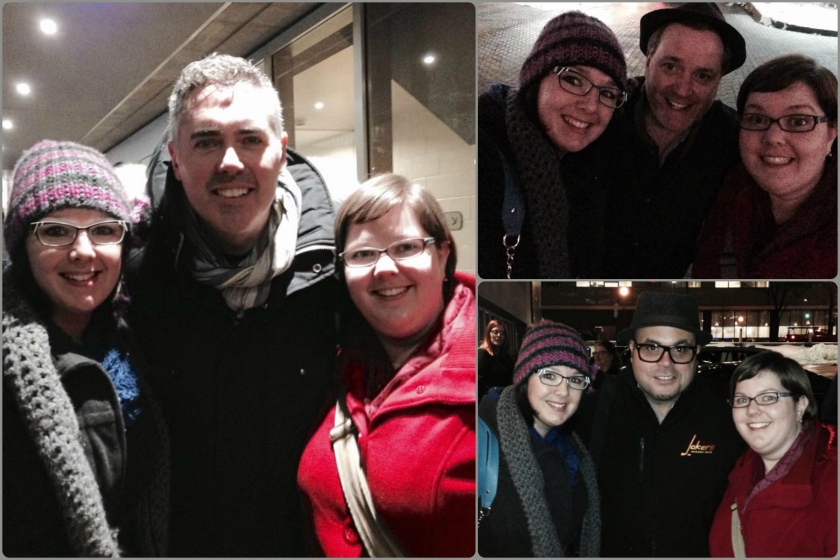