So, I moved in this past weekend. It was busy, lots of packing, lifting, sorting, organizing, and unpacking has taken place. Finding homes for all of my belongings is still a work in progress.

I am rather happy with my yarn storage, I just have to share pictures. 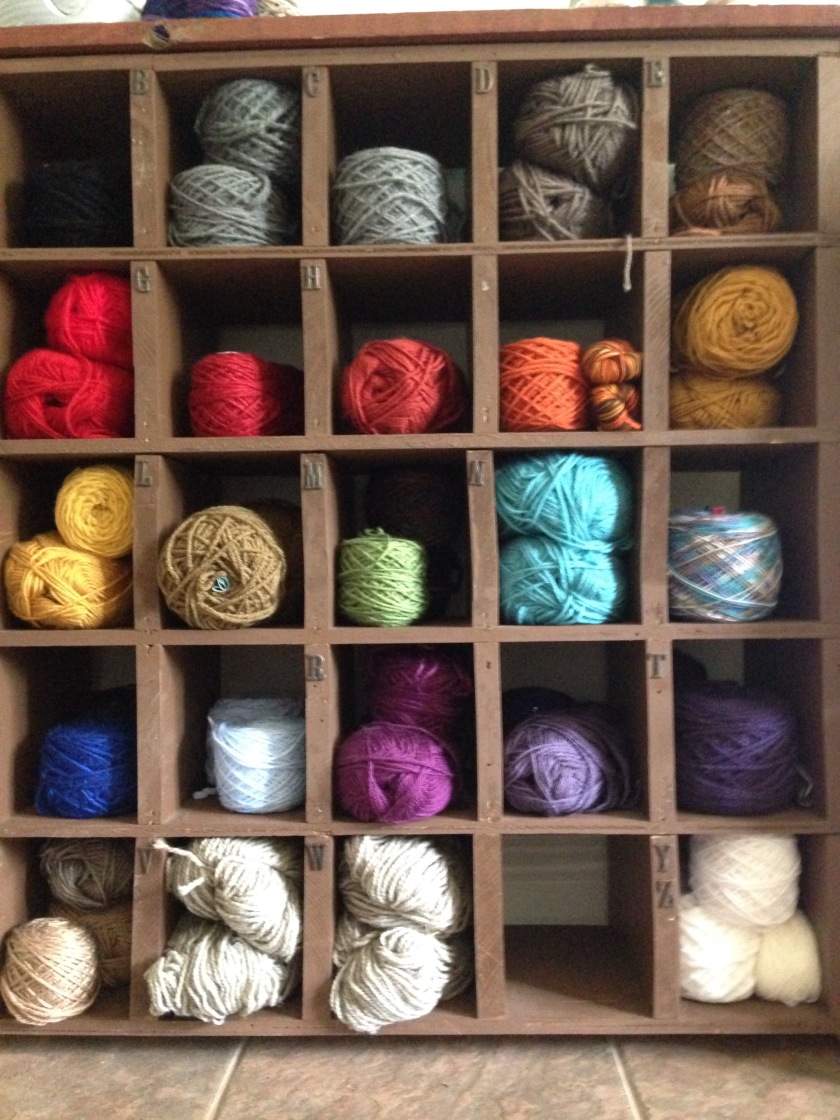 That’s all for now, folks. See you next week 🙂

I now have to return to unpacking…

This weekend was the Toronto Knitters Guild annual Knitters Frolic.  It was the 18th annual event, and my first time attending.  I left with an armful of yarn and a much lighter bank account.

Dozens of vendors attended, including indy dyers and yarn shops, and I was impressed at how geographically diverse it was!  There were plenty of vendors from the GTA, but also from the east coast and British Columbia!  I spent some time browsing in the morning, and in the afternoon, I met with a friend who I know from my LYS’s knitting circle, and we discovered we were each other’s yarn-enablers!

In actuality, I could have done much, much worse.  I bought more Turtlepurl sock yarn, this time in their Serenity colourway.  Kinda cunning, dontcha think?

I was also able to pick up a skein of Sweetgeorgia sock yarn for a good price; I had been eyeing this colourway for months now, simply loving the teals and browns.

I also fell in love with cotton yarn from Dye-Version, based out of Mississauga.  I debated what colour to buy, and they had so many options to choose from.  I settled on this lovely black and red yarn, two skeins of it with which I’m envisioning making a lovely summer scarf.  We spent time admiring the creativity of the colour names.  Mine is called Vampire Kiss.  So fun.

Finally, I was able to buy four skeins of Cascade 220, which is earmarked for making a Sontag.  What is that, you ask?  A Sontag is a style of wrap that was all the rage in the 1860s, named for the singer who popularized it.  I work for a Museum, and on occasion I have to wear a Victorian style costume, and this Sontag will provide extra warmth in the winter months.

The pattern I will use was first written in the 1860s, and another local museum, Pickering Museum Village, updated the pattern and re-wrote it into modern language.  Once I start the project, I’ll update my progress as I knit along.

The link for the PMV pattern can be found here.

Side note, life has been very busy and out-of-routine for the last week or so, so yes, my post is a day late!  My OCD side is rather irked by this inconsistency!!  See you next week blogging friends.

If you’re a frequent reader of my little blog (thank you if you are), you might have noticed I add my new posts on Mondays.  I’m a creature of habit.  I will often pre-write my posts on the weekend, when I have a little more time or if I know I won’t have time on the Monday to get something written.  I will not have time this Monday.  This Monday is going to be a very hard day.  Saying goodbye to someone who left us too early is one of the hardest things to do.

So here are pictures of my pretty sock yarns, some in progress of becoming something even more beautiful and others with their potential waiting to be realized.

Maybe you need a smile today too.

My Midwinter Cardigan is almost complete.  It’s in that stage where it’s so close, but there’s still enough knitting left to keep me busy.  One sleeve.  That’s all.  It’s testing my patience because I want more than anything is to set in the sleeves and wear it, but… one sleeve.

Last night, I blocked the body and the one finished sleeve, and I’m working on getting that sleeve finished.  My goal is to be wearing this cardigan by the weekend, and with how cold it has been in southern Ontario, having a warm sweater to wear will be delightful.

I have loved everything about this project, from the bulky yarn it called for, making it a quick knit (I used 7 hanks of Berroco Vintage Chunky), to the cabling down the front, which made knitting long rows more interesting.  I managed to get gauge with using 7.5mm needles, a somewhat awkward size.  To make the sleeves, knit in the round, I tried my hand at the Magic Loop for the first time.  It took me a while to get used to this new-to-me technique, and it also was an adjustment to not get ladders where the stitches were divided; ultimately I got used to this method and sleeve number two is knitting up like a dream.

Finally, I love that the yarn I bought for this project was the first yarn I wound on the swift my father made for me.  I bought the yarn a) for this project, and b) so that I could use my new knitting toy, hand made by my amazing father.  This cardigan will always remind me of that beloved Christmas gift.

Now excuse me while I continue to work on this sleeve…

My father is pretty amazing.  For Christmas this year, he made me a swift.

Months back, while getting frustrated winding hanks of Berroco Modern Cotton, I mentioned that a swift, or a yarn weasel, would be super helpful with this task.  Dad asked what I was referring to, and I quickly sketched a weasel, something that is simple (very simple if I was able to sketch it!), but effective.  Little did I know, he kept the sketch.

Fast forward to a month or so before Christmas, and my parents asked what I would like, and I said that I would love to receive a ball winder.  I guess this triggered my dad’s memory, and he started doing research on winders, and how one might make a swift.  He spent afternoons at my grandparent’s and uncle’s, working on the swift, cutting and drilling.  He even researched what kind of finish, if any, it should have (the pegs were ultimately left unfinished to prevent any transfer to the yarn).

When I received my gifts on Christmas morning, I was astonished to find out that the professional looking puzzle pieces fit together to become a swift, and that my dad made it himself.  I honestly thought that they bought it.  I tried it out a few days later after a trip to my LYS, and the swift works like a dream.

There is a sense of satisfaction that comes from winding yarn by hand, but the efficiency that the swift provides and the uniformity that comes from a wound yarn ‘cake’, they are unrivaled.

Many, many thanks to my father for his innate awesomeness, for his creativity, and for this wonderful gift that I will treasure for years and years.